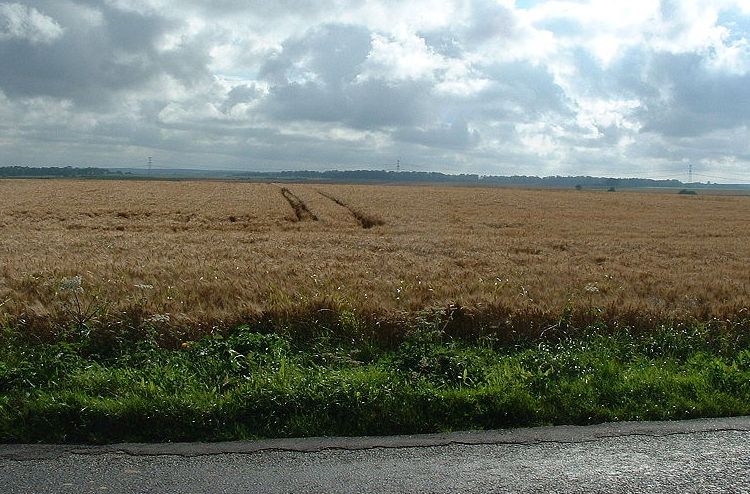 Reported in The Caledonian Mercury, Edinburgh, Monday, May 25, 1818

It was sometime ago mentioned, in one of the English newspapers,

that some of the officers attached to the British Staff of the Army of Occupation had been employing themselves in searching for reliques on the field on which the famous battle of Agincourt was fought on the 25th of October, in the year 1415 – We are very happy to learn that their labours have been crowned with success far beyond their expectation, and the number of gold pieces already found amount to upwards of sixty, one of these, which is in the possession of his Grace the Duke of Gordon, in in the highest state of preservation. On one side is the arms of France, with the following inscription:- Karolus Dei Gracia Francorum Rex [Charles, by God’s Grace, King of the French]; and on the reverse, PC regnat, PC Imperat. – PC meaning per Christum, or Crucem.

The gentlemen engaged in this research discovered the spot where the nobles who fell on that day were buried; and besides the coin above mentioned, various other reliques have been got; many fragments of iron, and among them several arrow-heads, one of them in the most perfect state of preservation; two lance-heads, one six, the other eight inches long, and a spur. Several rings have also been found, some of gold,and from their diminutive size are supposed to have been pledges given to the Knights by their their fair Dames, on departing to the wars. One ring is enamelled and on the outside bears, in old characters, the words Pleine amitie, and inside a flower like a rose, with belle after it, possibly intended as an enigma for the lady’s name, Rosabelle. One brass ring was found filled with clay and a finger bone sticking in it; the wearer did not expect it to remain there for upwards of 400 years. Buckles and other insignia of the fray have likewise been collected.

The gentlemen engaged in this anxious research had, previous to the beginning, secured the right by purchase, else it is shrewdly suspected that their operations would have been impeded long since by the French government.

These interesting excavations, conducted by Major General Sir John George Woodford, who fought at Waterloo as a first lieutenant in the Guards, were conducted shortly after the victory over Napoleon in 1818. They appear to have lasted only a short time before being abandoned, possibly at the instigation of the Duke of Richlieu, and it seems that this Edinburgh newspaper was rather late with the story, since the abandonment had been noted in London’s Morning Chronicle a month earlier.

It has already been stated, that an English Officer, who had purchased the ground on which the battle of Agincourt was fought, had employed persons to make excavations, and had discovered a number of curious relics. One of the French journals says, that the inhabitants lamented to see brought to light these testimonies of a great disaster sustained by France, and in consequence of the expression of their feelings upon the subject, these had been abandoned.

As media coverage of the recent location of human remains believed to belong to Richard III in a Leicester car park have shown, objects relating to past events have a power of their own and can be news in themselves. These newspaper accounts, dating from the early nineteenth century give some insight into the importance which was attached to Agincourt following the close of the Napoleonic Wars. They also illustrate one of the problems with the archaeology of medieval battlefields: the finds that survive are generally very small and either quite valuable – and thus readily picked up and sold privately – or undistinguished and susceptible to corrosion or disturbance through farming activity. The passage of time adds to these problems and, while the popularity of metal detecting makes finds such as these easier to recover, it also has the potential to displace or destroy valuable contextual evidence. Recent work at the sites of the Wars of the Roses battlefields at Towton (1461) and Bosworth (1485) has revealed a great deal and work is under way again at the site of Agincourt.

Our thanks to Dom Barker for unearthing these interesting snippets detailing early archaeological interest in the site of the battle of Agincourt.

Photograph of the site of the battle of Agincourt taken from Wikipedia, licensed under the Creative Commons Attribution 2.0 Generic Licence, author Chris Hartford from London