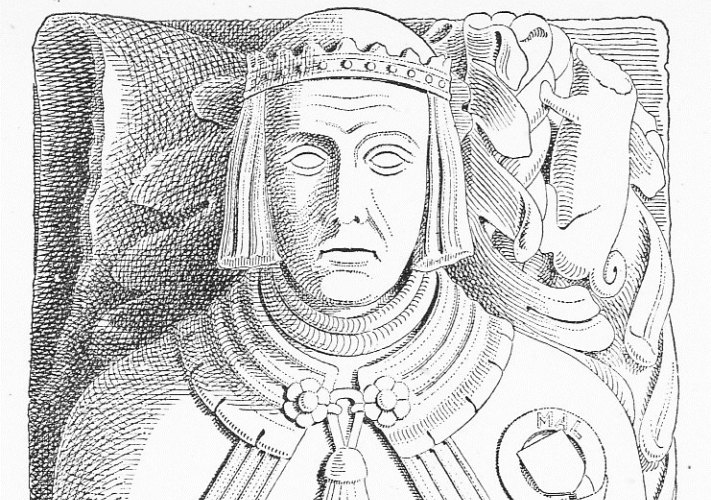 This week in 1414 saw activities associated with work on the king’s ships and the Lordship of Ireland.

On 2 December 1414, William Catton, Keeper of the King’s Ships, was given £40 for the wages of carpenters working on the construction of the ship the Trinity Royal at Greenwich.  The same day a further sum of £137 2s 5 ½d was given to Catton for unspecified reasons, most likely for the same purpose.   Construction work had started on the vessel the previous year and it was to become one of a number of ships known as the ‘king’s great ships’.  Catton’s tenure as Keeper of the King’s Ships was marked by a great expansion in the number of royal vessels and the Trinity Royal was his first major construction project.  It appears that the ship was made from the shell of an older vessel of 300 tons called the Trinity of the Tower, which had been the royal flagship of Richard II.  By 1415 it had entered service as the king’s flagship at 540 tons, having cost almost £1,700 to build, and was used in the expedition to France.

Later in the same week, on 4 December, John Talbot, lord Furnival (b. 1387), was granted a year’s protection for staying on the king’s service in Ireland, serving as the king’s lieutenant there.  Talbot had previously fought in Wales against the rebels of Owen Glendower and had a reputation for violence.  In 1413, he was involved in a quarrel with the earl of Arundel and was briefly committed to the Tower of London, before being appointed lieutenant of Ireland by Henry V.  His time in Ireland was characterised by a number of highly destructive raids conducted against the Gaelic Irish.  One Gaelic author went so far as to claim that ‘from the time of Herod there came not anymore more wicked’.

His service in Ireland explains why he was not at Agincourt. His service in France began in 1420 and lasted until his death at the battle of Castillon in July 1453, the battle which ended English tenure of Gascony. He was one of the leading English commanders, being rewarded for his service by elevation to the earldom of Shrewsbury in 1442. His elder brother, Gilbert, Lord Talbot (1383-1418), was at the battle of Agincourt and died in the French wars at the siege of Rouen on 19 October 1418.

Talbot’s service in Ireland was required in 1414 due to the particular circumstances of Ireland in the late medieval period.  In the twelfth century Henry II of England was granted the Lordship of Ireland by Pope Adrian IV.  Large parts of Ireland were then conquered by Anglo-Norman lords, with English settlers settling in east Ireland later known as the Pale of Dublin.  During the fourteenth century, however, a Gaelic revival had taken place with English rule increasingly under threat.  In practice, by 1414, the authority of the king’s lieutenant in Ireland was limited to the Pale of Dublin, with subsidies required from England to pay for soldiers to provide security to the embattled Lordship of Ireland.

Image is of a drawing of the effigy of John Talbot, taken from Wikipedia and is in the Public Domain