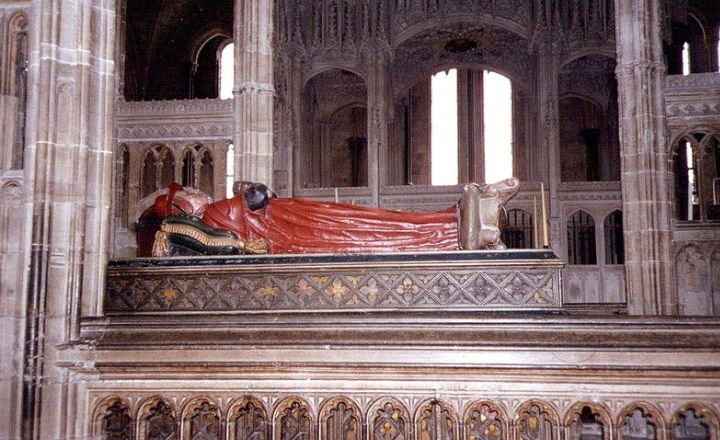 This week in 1414 saw the appointment of auditors for the accounts of royal officials in South Wales, a commission for the construction of guns and the purchase of the priory of Andover by Winchester College.

On 8 December 1414, a commission was given to John Everdon and William Hesill, auditors of accounts of the Exchequer, to audit all accounts of chamberlains, receivers, bailiffs and provosts and other ministers of the king in South Wales (these were the lands of the principality of Wales which Henry still held as king as he had no son at this point). They received 5s each daily for their wages and expenses, from the day of their departure from the city of London until their return. This was a good wage: even in 1414 it was already a good career move to be involved in accountancy and auditing!

The chamberlains and other officials were responsible for the administration of lands in South Wales, including the receipt and expenditure of money.  They had to account for this to the Exchequer where their accounts were audited.  It is because of this auditing process that some of these records still survive at the National Archives, as part of document class SC6.

The same day, William Woodward, ‘founder’ of London, and Gerard Sprong, esquire, were appointed by the king to take metal, saltpetre, timber and workers for the construction of guns in the city of London.  Woodward had supplied guns for the crown since the reign of Richard II and was to play an important role in the making of ordnance throughout the reign of Henry V.  As a founder, Woodward would have been active in the casting of bronze items, such as bells, as well as bronze guns.  Some of these guns may well have been taken on the expedition of 1415.  For more information on the use of guns by Henry V click here.

Two days later, on 10 December, the purchase of the priory of Andover by Robert Thurberne, warden, and the scholars of St Mary’s College, Winchester College, was confirmed by the king at the request of the king’s uncle, Henry Beaufort, Bishop of Winchester.  Winchester College was founded by William Wykeham, bishop of Winchester, in 1382 and was finished in 1395.  The school was set up to provide education for 70 poor scholars, 16 choristers and 10 ‘noble Commoners’.  Upon Wykeham’s death in 1404, Henry Beaufort was appointed bishop of Winchester by his half-brother Henry IV.  He spent time as chancellor in the reign of Henry IV and was again appointed to the office by Henry V on his accession to the throne in 1413. He it was who had announced the king’s attention to invade France at the opening of the parliament of November 1414.

Image is of the tomb of Cardinal Beaufort in Winchester Cathedral, licensed under the Creative Commons Attribution-Share Alike 3.0 Unported licence, author Scrivener-uki