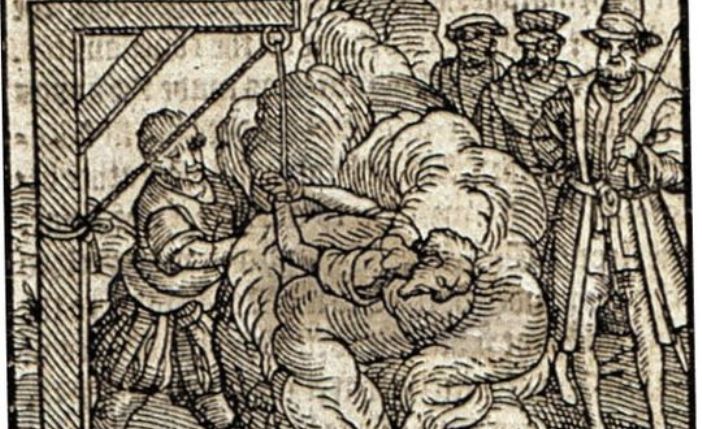 On 16 and 17 December ten men were given pardons, including: Nicholas Selby, an ironmonger from Leicester; Richard Sprotford, a carpenter from Buckinghamshire; Thomas Gray, a clerk from Northamptonshire; Thomas Blake, a weaver from Chester; and John Garthorpe, a scholar from Oxford.

These men were followers of theological ideas which had been disseminated by the scholar John Wycliffe (c. 1330-1384). Wycliffe’s beliefs clashed with those of the traditional church, including the denial of the sanctity of the sacrament, baptism, confession and the use of imagery in churches. This also included attempts to translate the bible into English, so that it could be interpreted by the laity as opposed to just the clergy. Despite Wycliffe’s death (in 1384), his ideas spread to at least part of the population including a small group of high ranking individuals described by historians as the ‘Lollard Knights’. These men were keen to challenge the power and wealth of the church, which they thought should be brought under secular control (it is therefore easy to see why they were later seen as martyrs by Protestants such as John Foxe).

Initially the Lollards faced little persecution during the reign of Richard II, in the late fourteenth century, by the accession of Henry IV in 1399, however, this was to change. The first heretic in England to be burnt alive at the stake occurred in 1401, the same year that a statute of parliament was granted enacting tough measures to combat heresy. Later, in 1410, Prince Henry was to intercede with a heretic on the stake to recant his beliefs in order to save his life, entreats which were refused.

Upon Henry’s accession to the throne, in 1413, he was to come into conflict with a Lollard who had formerly been a friend of his, Sir John Oldcastle. Oldcastle confessed in the presence of the king to be in possession of tracts of a heretical nature and was confined to the Tower of London in late September. In October he was put on trial and was excommunicated. Henry, undoubtedly reluctant to execute his friend, then gave him forty days to reconsider his views and to recant.

Instead, on 28 October, Oldcastle was able to escape from the Tower at night time with the aid of accomplices. One of these men, William Fisher, a parchment maker, sheltered him in his house near Smithfield. Whilst in hiding Oldcastle plotted an uprising to overthrow the king, events which were vividly portrayed by the author of the Gesta Henrici Quinti (written in 1417).

And, conspiring thenceforward with his confederates in holes and corners against the power of both Swords as he had done previously, during the next solemn festival of Our Lord’s Nativity-when, according to the song of the angels, there should be peace on earth towards men of good will, and when all men of true faith were engaged in praise and rejoicing at the celebration of these solemnities and had no such evil thing in mind, and when the king with the majority of the lords of his realm, spiritual and temporal, was intending to keep Our Lord’s Epiphany (6 January), like the preceding feast, in his manor of Eltham-that man of bloody and unheard-of treachery resolved to make a surprise attack by night upon the king and his men and consign them all indiscriminately to death by the sword.  However, the treason of that follower of Satan having been discovered and resistance organized, God delivered the innocent from the hands of the ungodly.

Following the failure of the conspiracy, a number of Lollards were hanged for treason.  Later in March 1414, pardons were granted to all individuals, save for those in prison. Oldcastle was to remain at large until 1417 when he was captured in Wales and executed in London.

Picture of John Oldcastle being burnt, from Holinshed’s Chronicles (1577), taken from Wikipedia and is in the Public Domain