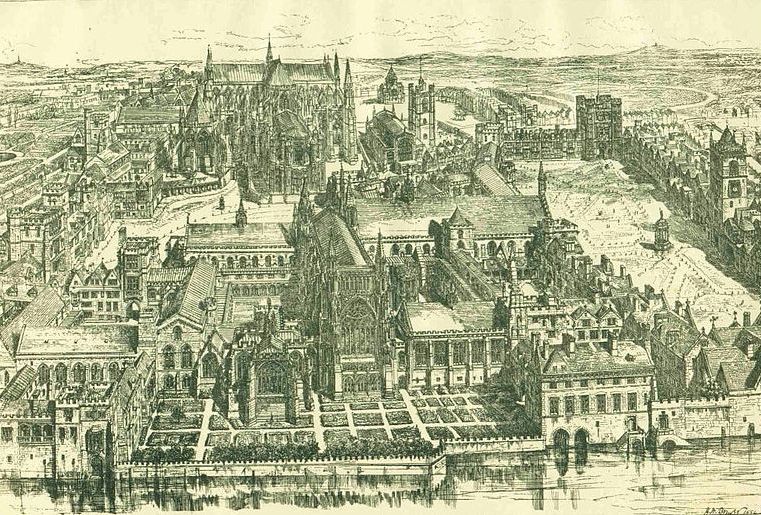 This week the business of government stopped for the celebration of Christmas.

The king and court spent Christmas day at the Palace of Westminster, which is likely to have been richly decorated with holly and ivy (Christmas decorations of a sort already existed in the fifteenth century!). A poem dating from the fifteenth century (of unclear date, quoted from Hutton’s The Rise and Fall of Merry England) states:

Nay, ivy, nay, it shall not be, I wys,
Let holly have the master as the manner is,
Holly stood in the hall, fair to behold,
Ivy stood without the door, she is full sore a-cold

Christmas (from the Middle English for Christ’s Mass) was characterised by lavish banquets, which were to continue on the following days up until Twelfth Night. For instance a Christmas day feast for Richard II in 1377 saw the consumption of twenty-eight oxen and three hundred sheep. Accounts from noble households of the period show that musicians were often employed at this time. Dame Alice Harper paid for a harper to perform on a regular basis from Christmas to New Year in 1412, whereas the earl of Warwick’s family paid for eleven minstrels to entertain them at Berkeley Castle in 1420. Other events would have included re-enactments of the Nativity and gifts of pennies to paupers. St Stephen’s Chapel, a royal private chapel at Westminster Palace, would have been beautifully lit up with candles where the king would have observed the three masses proscribed for the feast of the Nativity and other religious services. Further entertainment would be provided by performances put on by mummers who wore bizarre costumes and who took part in ‘disguising games’. The authorities could be mistrustful of such activities, however, with the Corporation of the City of London forbidding mummery, plays and other such festivities during the holy time of ‘Cristemes’ under pain of imprisonment in 1418. Christmas was also a time, it appears, when the servants of the aldermen of the city tried to abuse their position by obtaining gifts from brewers, bakers, cooks and other victuallers by begging and threats of violence. This practice was forbidden in 1419, with offenders to lose their jobs if caught.

Picture is of a reconstructed view of the Palace pf Westminster in the time of Henry VIII drawn in 1884, author H J Brewer, taken from Wikipedia and is in the Public Domain