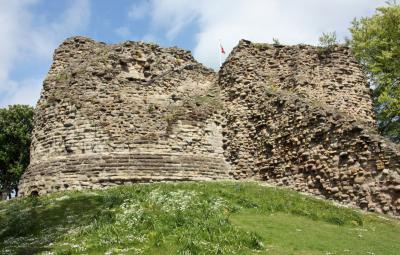 From June 1417, both Charles duc d’Orleans and Marshall Boucicaut, captured at Agincourt and held for ransom, were held prisoner at Pontefract Castle.  Their gaoler was the Constable of Pontefract Castle, Robert Waterton, who in 1399 had been given custody of Richard II. The prisoners appear to have been given a fair degree of liberty as they were regularly allowed to visit Waterton’s estate at Methley, six miles away, where the hunting was particularly good.

Henry V became suspicious of the friendship which developed between the duke and his gaoler and the duke was transferred to Windsor Castle.

D’Orleans returned to France after 25 years in captivity but tragically Boucicaut never saw his home again and died whilst still in Yorkshire in 1421.

Some very fine alabaster effigies of Robert Waterton and his wife, Cecily Fleming, can be seen in St Oswald’s Church, Methley.