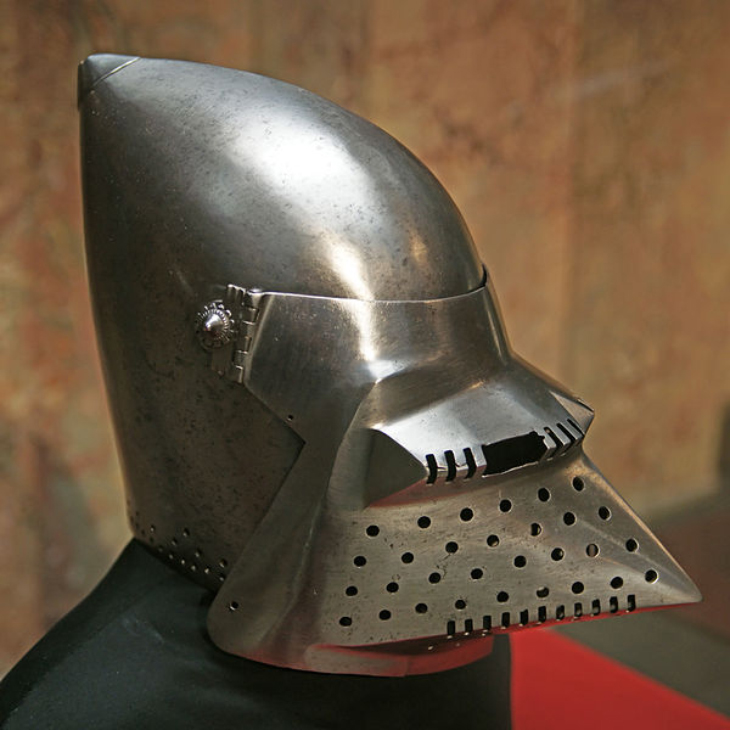 When Henry V’s army departed in August 1415, between a quarter and a fifth of the soldiers were men-at-arms.

Most of these were of the status of esquire – indeed this term was often used in the muster rolls to describe them – and were paid one shilling per day (twice the rate of pay of an archer). Some were of noble and knightly rank and received higher rates of pay based on their social status. A duke, for instance, was paid 13 s 4d per day. In addition, captains received an additional payment (a regard) for their men-at-arms which was set at 100 marks for every 30 men at arms for every three month period. This was in recognition of the higher costs men-at-arms incurred in terms of equipment and armour.

Whatever their social status, these were all men who had been trained in arms and in horsemanship from an early age. In a battle situation such as Agincourt, they would fight on foot, armed with lances, swords and other staff weapons.

By 1415, fully articulated suits of plate armour, known as ‘white armour’ (harnois blanc) were in use by the men-at-arms. This included the use of various items such as breastplates, gorgets, rerebraces and sallets to protect different parts of the body. This equipment was vital for keeping a man-at-arms alive in the mêlée (the hand-to hand fighting in a battle).

Here is a brief glossary:

Bascinet – a type of helmet

Pairs of plates – cloth armour with riveted plates inside

Sallet – a type of helmet

If you would like to see examples of surviving arms and armour from the period, why not visit the Royal Armouries at Leeds or the Tower of London. Other examples can be seen at the Wallace Collection in London.
This information came from A.R. Bell, A. Curry, A. King and D. Simpkin, The Soldier in Later Medieval England (OUP, 2013), and Charles John Ffoulkes, Armour & Weapons (Oxford: Clarendon Press, 1909).

Photograph of a bascinet held at the Neue Burg collection in Vienna, taken from Wikipedia Creative Commons Licence, author Sandstein