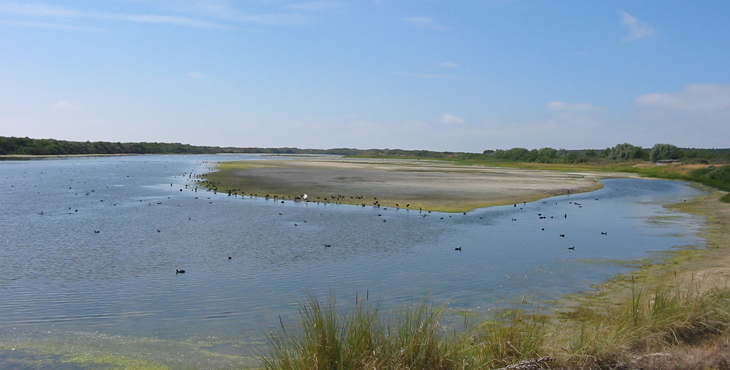 The first objective after landing in France was the capture of Harfleur. Once this had been achieved, and measures had been taken to secure the town, Henry set out for Calais. The most significant obstacle between Henry and this English foothold in France was the Somme. Somewhere along his route the river would have to be crossed. This was as obvious to the French as it was to the English and Henry could expect his crossing to be opposed. The shortest and most direct route to Calais would take him across the estuary of the river at a ford, a few km downstream of Abbeveille, known as Blanchetaque. Seventy-one years earlier, Henry’s great-grandfather Edward III had forced a crossing against French opposition before the battle of Crécy. When Henry approached Blanchetaque on 13 October 1415, however, he found that he faced a much more substantial force than Edward had done, perhaps as many as 6,000 men under the command of the Constable of France. To attempt to cross at Blachetaque would have been a very risky enterprise in these circumstances, and instead Henry turned and marched up river to find another crossing.

The river upstream towards Amiens follows a fairly straight course and it was easy for the French to keep pace with Henry as he continued his march. At Pont-Rémy, between Blanchetaque and Amiens, the problem that the English faced became clear. As elements of the army approached they found the causeway broken and the town well defended. This was the pattern elsewhere where bridges had been destroyed, causeways cut, and fords staked to hamper any English attempts to cross the river. As Henry moved up river to find a crossing he needed to get ahead of the French who were dogging his every step. Above Amiens the changing character of the river, with its wide, meandering bends, came to his help. By cutting across the chord of a wide sweep in the river, Henry was able to gain a half day’s march on the French and at last find a crossing place, variously recorded by chroniclers as Éclusier-Vaux to the north-west of Péronne, between Péronne and St-Quentin, Doingt, slightly to the east of Péronne, and between Béthencourt-sur-Somme and Voyennes. It is at this latter place, 7km north-east of Nesle, that Henry most probably found the crossing point he so needed.Blanchetaque to Béthencourt 1

It was reported that there were two narrow causeways. They had been broken in the middle of the river, but they had not been staked as they should have been. Even with the causeways broken a crossing could be made in single file, and men-at-arms and archers were sent across to establish a bridgehead and to protect the crossing of the bulk of the army. The causeways were then repaired, using faggots, straw and planks. Some accounts talk of the English demolishing houses and taking shutters, windows and ladders to bridge the gaps, and others describe Henry commandeering labourers and carpenters to fell trees and construct a bridge. The crossing seems to have been carried out with remarkable discipline. Realising the importance of avoiding congestion, Henry and his senior lieutenants took a hands-on approach to managing the crossing. They positioned themselves by the two causeways to marshal the crossing of men, horses and vehicles with one causeway used for wagons and the other for troops. Once the archers had crossed first to create a defensive bridgehead, a standard was planted, and then the remainder of the vanguard crossed followed by the centre division and the rear-guard.

Around nightfall on 19 October 1415 Henry’s army was safely across the river. The French were taken by surprise by the crossing. Some patrols probed the bridgehead to see if they could drive the English back, but they were too late. English mounted patrols drove them off, and the period of vulnerability passed as Henry’s strength on the far bank increased. The problem for the French had been that as potential crossing points became more numerous the further that the English moved upstream, and with a long stretch of area to watch, they had had to disperse their troops in small groups. The slow communications of the period and the time required to then reassemble the army meant that they could not marshal sufficient troops in time to oppose Henry’s crossing, particularly as he drew ahead of the French with the advantage of the sweep of the river.

Discussion of Henry’s crossing of the Somme can be found in Agincourt, a New History, by Anne Curry, (Stroud, 2005), paperback edition 2006. The related sources are in The Battle of Agincourt, Sources and Interpretations, Anne Curry, 2nd Edn (Woodbridge, 2009). Detailed information for tourist’s wishing to visit Blanchetaque and the crossing point on the Somme between Béthencourt-sur-Somme and Voyennes can be found in Agincourt 1415: A Tourist’s Guide to the Campaign (See below).

Top image is of the Somme between Béthencourt-sur-Somme and Voyennes, bottom image is of Blanchetaque