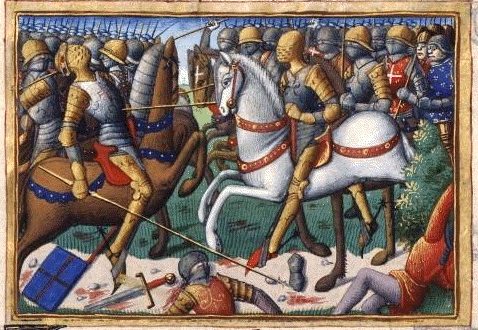 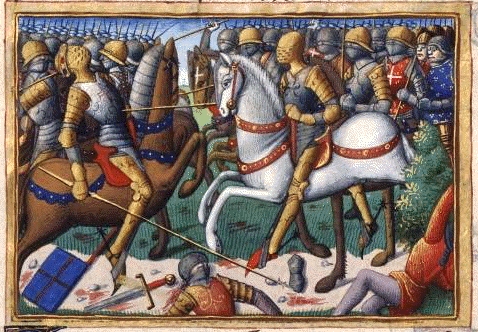 The beginning of this week saw a commission given to Richard Redeman and John Strange to muster the retinue of Thomas, duke of Clarence, the eldest of Henry’s brothers, at St Catherine’s hill near the New Forest. This was probably the hill near Christchurch rather than that near Winchester. Thomas led the largest companies in the army. He had indented for 960 men (240 men-at-arms and 720 archers), but his muster roll (TNA E101/45/4) actually lists 1033 names. Alongside him was his step son, Henry Beaufort, earl of Somerset, who was born in November 1401 and therefore still only a teenager – maybe one of the youngest men-at-arms on the campaign. In Clarence’s service we also find the peer Humphrey, lord FitzWalter, Sir John Lumley, Sir John Daubridgecourt, Sir Edward Burnell and a number of other knights.

Although Clarence was an important commander during the siege of Harfleur, detailed by his brother to the eastern siege camp where mines were dug under the walls of the town, the duke contracted dysentery and had to be invalided home with 47 of his company but at least 6 knights, 151 knights and 585 archers are known to have served at the battle. Since we have no evidence to the contrary, the teenage Henry, earl of Somerset was there, but he died unmarried in 1418.

Clarence played an important part in his brother’s later wars in France, but was killed at the battle of Baugé on 21 March 1421. His tomb in Canterbury Cathedral in the chapel of St Michael shows him with his wife Margaret Holland, and her first husband John, earl of Somerset (d. 1410), the young Henry’s father.

During this week Henry V was resident at Bishops Waltham in the palace which was one of the main residences of the bishops of Winchester and a popular location for royal visitors. But he carried out several visits to Southampton, the port which played an important part in the campaign, and which was an assembly place for the ships procured for transporting the army to France. Furthermore the wealthy burgess William Soper had been busy constructing royal warships, such as the Holigost, for the expedition at the town.

It was whilst the king was at Southampton castle on 24 July that he drew up his will.  It was essential for him to do this before he set out on campaign, in case he died during the expedition. Many others participating in the campaign also made their wills before departure.

The terms of Henry’s will included the provision of goods and money to members of his household and noblemen, such as the king’s uncle Thomas Beaufort, earl of Dorset, who was to have received one gold cup with a star worth £100, in addition to 1,000lbs pounds worth of gold. As we have already seen earlier this year, Dorset had previously served the king in Gascony and was to play an important part on the Agincourt campaign, serving as captain of Harfleur after its capture. Henry also specified that he wished to be buried in Westminster Abbey and gave strict instructions on the location and form of the chapel to be constructed to house his tomb. He was keen to be buried as close as possible to the shrine of St Edward the Confessor. His instructions were followed in the years after his death in 1422 although the chapel was not fully completed until the 1430s. in his will Henry appointed a number of leading figures, such as Henry Beaufort, bishop of Winchester, and Sir Walter Hungerford, to be his executors.

The mustering of large numbers of soldiers in southern England appears placed strains on relations with local communities, as can be seen by the king’s instruction, on 24 July, to the sheriff of Southampton to proclaim that people molested by these troops should complain to the steward of the treasury or comptroller of the household to seek redress. Henry at the same time also instructed the sheriff to inform the soldiers gathering for the expedition that they were expected to obtain victuals for a quarter of a year to take with them.

On the same day, Henry gave provisional licence to Sir Robert Chalons to dispose of a gold cup, two bowels and a basin of silver gilt given to him as security for a payment of £45 6s 10d, for the wages of his retinue of two men-at-arms and nine archers for the second quarter of the year. Chalons with the two men-at-arms and six archers later served in the garrison of Harfleur, whereas the remaining three archers fought at the battle of Agincourt.

Henry’s diplomatic efforts against the French also continued this week, with the appointment of John Waterton, the Master of the King’s Horses, and John Kemp to treat for an alliance with Ferdinand I of Aragon. Aragon (now part of modern Spain) was one of the most powerful kingdoms in Iberia and potentially a useful ally against the French.  Waterton and Kemp were also empowered to negotiate a marriage between Henry and Ferdinand’s daughter, Mary.

An image of the battle of Bauge in 1421, taken from Wikipedia and is in the Public Domain