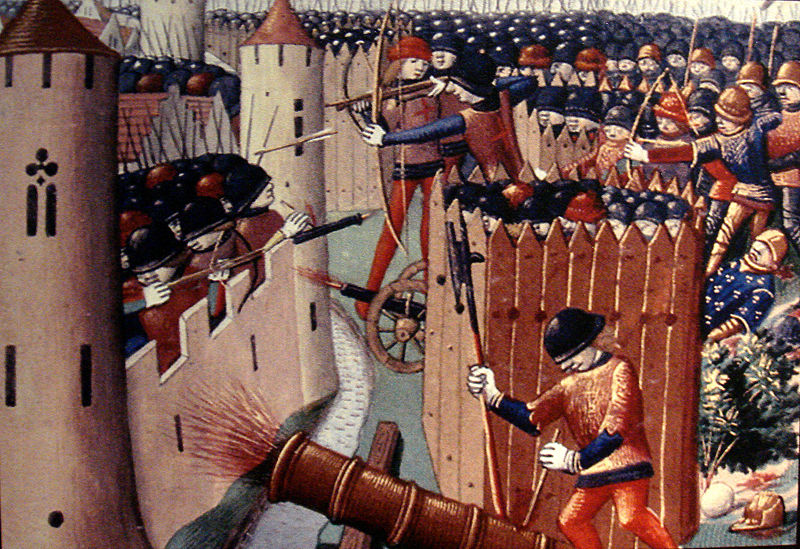 The bombardment of the town could now begin, as the English guns and other siege engines were now in place and were protected by trenches and wooden mantlets. The author of the Gesta Henrici Quinti gives a vivid account of the destruction inflicted by these weapons, which within a few days had caused significant damage to the walls and towers of Harfleur, in addition to ‘really fine buildings, almost as far as the middle of the town, were either totally demolished or threatened with inevitable collapse’.

Gunpowder artillery had previously been used by the English in the sieges of the Welsh rebel-held castles of Aberystwyth and Harlech earlier in the century, but this was the first time that they had played an important part in attacking a major settlement. The extensive preparations undertaken by Henry over the course of the previous year, including the purchase of 18,000lbs of iron for the construction of guns and 10,000 gunstones, show that a protracted siege had long been anticipated. It is unknown how many guns were used by the English at Harfleur, although an inventory of guns in the possession of a royal official, Gerard Sprong, esquire, compiled earlier in 1415, does reveal, however, that the king possessed at least five large guns called Clysf, Fowler, Bristol, George and God’s Grace.

The French defenders responded to this barrage by carrying out repairs to their defences and making strenuous efforts to harass and resist the English besiegers. This won grudging praise from the author of the Gesta, who remarked that they used guns, catapults and engines from the bulwarks, walls and towers as long as they could. After these fortifications had been rendered indefensible, they improvised by using screens, ‘shattered openings in walls, and from other places where shelter would not have been thought possible’. Furthermore, that the damaged fortifications were repaired by the defenders at night time, using timber, earth, stones and other materials to shore up the defences. He concluded by stating that ‘Nor, in men’s judgement, could a people under siege have resisted our attacks more sagaciously, or with greater security to themselves, than they did’. This determined defence meant that the siege of Harfleur would continue to drag on for some time.