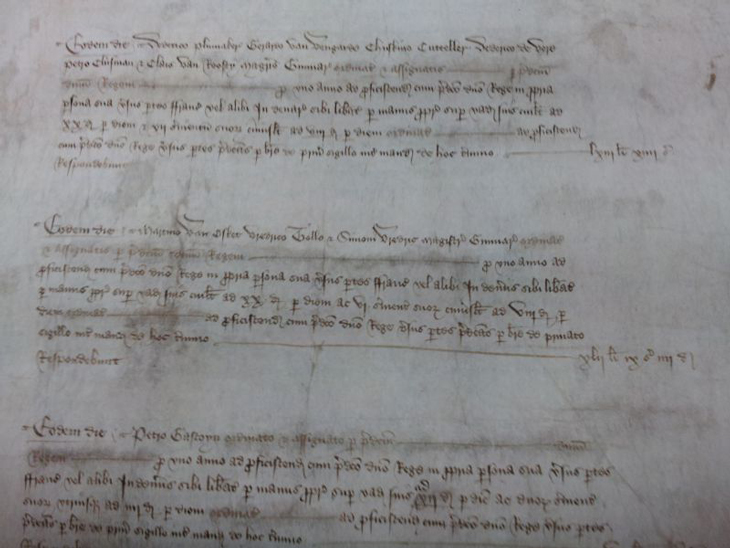 Gunners are first recorded in English service in 1346 during the reign of Edward III.

This coincides with the earliest use of guns by the English at the battle of Crecy (26 August 1346) and the siege of Calais (4 September 1346-3 August 1347). However these professionals were only employed in small numbers prior to the reign of Henry V.

Twenty-six master gunners were recruited for the 1415 expedition in addition to a further fifty-two assistant gunners. They were used to operate and maintain the king’s guns during the siege of Harfleur (13 August-22 September). This information is contained in a document called the Pells Issue Roll, which contains details of men who indented to serve with the crown for the 1415 expedition. The document is preserved in the National Archives in Kew, reference E 101/45/5.

Many of these men subsequently served as part of the garrison of Harfleur after its capture. We can determine this as a set of accounts survive for the treasurer of Harfleur, Thomas Barneby, for the years 1415 to 1420. This document is preserved in the National Archives, reference E 36/79. The majority of the gunners were of Dutch or German origin judging from their names and the skills of continental gunners continued to be prized by English monarchs throughout the fifteenth and sixteenth centuries. The standard rate of pay for a master gunner in the fifteenth century was 12d or 1s whereas assistant gunners were often paid 6d per day. A master gunner therefore received as much as a man-at-arms and an assistant, the same wage as an archer.

These gunners were skilled in demand professionals who were paid to perform a variety of different tasks. Some idea of the skills necessary to be a gunner can be seen from surviving copies of the Feuerwerkbuch (The Firework Book). This was a manual written in German for gunners composed around 1400, which had advice on different matters including how to mix gunpowder using the components of saltpetre, sulphur and charcoal. Gunners were often also paid to construct wrought iron guns which would have been forged using smithy skills. Therefore gunners made and maintained guns as well as firing them.