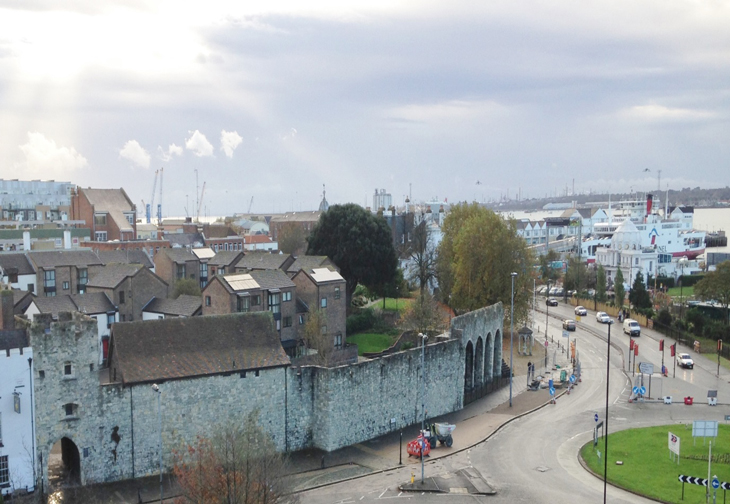 Nowadays historians are reluctant to recognise Henry V as one of the founders of the Royal Navy, because the word ‘navy’ was not used in the modern sense until the 16th century and ‘the Royal Navy’ implies the existence of a standing fleet of royal ships, when no medieval monarch possessed one (nor for that matter was there a standing army).

In addition, it was impossible to exercise true sea power in medieval times, because the ships of the day found it difficult to keep the sea, let alone intercept an enemy. Lastly, there was no continuity between the fleet of Henry V and that of Henry VIII (the next monarch with a claim to be the founder) since nearly all the royal ships which Henry V had were sold soon after his death.

Yet the fact remains that Henry took an unprecedented interest in naval affairs and, during a short reign (1413-1422), he built or refitted a record number of royal ships, so that there was a royal squadron of seven ships in operation in Agincourt year. These were warships, much larger and stronger than contemporary merchantmen, and in some cases built with high-sided hulls. These were difficult to board and provided good platforms for missile weapons, including primitive guns. Moreover, if Henry could not hope to command the sea, he made strenuous efforts to safeguard home waters. In February 1415 he ordered that a small royal squadron should guard the seas from Plymouth to the Isle of Wight, from the Isle to Orford Ness, and from Orford to Berwick, during his impending voyage to France. Two ships, 2 barges and 1 balinger were allocated to the first station, 2 barges and 2 balingers to the second, and 1 barge and 2 balingers to the third.

Henry’s reign also coincided with the rise of Southampton as a port. William Soper, who was to become Clerk of the Ships in 1418, was an MP for Southampton in 1414, when Parliament considered a petition from the inhabitants, complaining of the great decay of their town and asking for aid; but the town soon began to enjoy royal favour. Henry V’s flagship in 1415, the Trinity Royal (540 tuns) had been built in Greenwich, but in February 1414 Soper was commissioned to repair a ‘great ship of Spain’ in Southampton, which was reborn as The Holy Ghost of the Tower; and in 1416 a primitive dock was dug in Southampton, where Henry’s second flagship, the mighty Gracedieu of 1,400 tuns was to be built.

Southampton was where Henry V’s army and fleet were assembled in 1415. On 19 March Thomas Earl of Dorset, Admiral of England was ordered ‘to cause all ships, barges, balingers and other vessels of England to be at the port of Southampton by 8 May’. On 27 July two officers were commissioned ‘to seize all ships and other vessels of the realm and foreign parts of the portage of 20 tuns and more in the port of London and take them to the port of Southampton with all possible speed to serve the king on his present voyage’. The anonymous chaplain who wrote the Gesta Henrici Quinti tells us that the fleet which accompanied Henry to Normandy consisted of 1,500 vessels in all (though Susan Rose thinks that 400 would be nearer the mark). The vast majority of these ships must have been unremarkable transports, hired (or commandeered) for the occasion; and several hundred are thought to have been hired in Holland and Zealand; but the royal squadron of warships must have provided vital protection against the possibility of attack by Castilian galleys or Genoese carracks, in the service of the French Crown.

In fact the royal squadron saw no action in 1415, because the French did not put to sea, or even try to prevent the English from landing in Normandy; but two sea battles were fought the following year and between 1416 and 1420 the squadron became a fleet of around 36 vessels and was kept busy, patrolling and supporting the King’s campaigns in northern France. As a result of Henry V’s conquest of Normandy between 1417 and 1419 and his policing of the Channel, the South of England enjoyed a generation of relative security, from piracy and French raids alike. The author of the Libelle of English Policy (late 1430s) gave Henry due credit for this and regretted that ‘the Navy’ he had built was no longer in service:

If he had to this time lived here,
He had been prince named without peer;
His great ships should have been put in press
Unto the end that he meant of in chief.
For doubt it not but that he would have been
Lord and master about the round sea.

1 Balingers used both sails and oars and usually weighed between 30 and 120 tuns. A ‘ship’ was larger and had sails only.

2 Carracks were large ships with high sides and a large amount of space for cargo which were also equipped to fight.