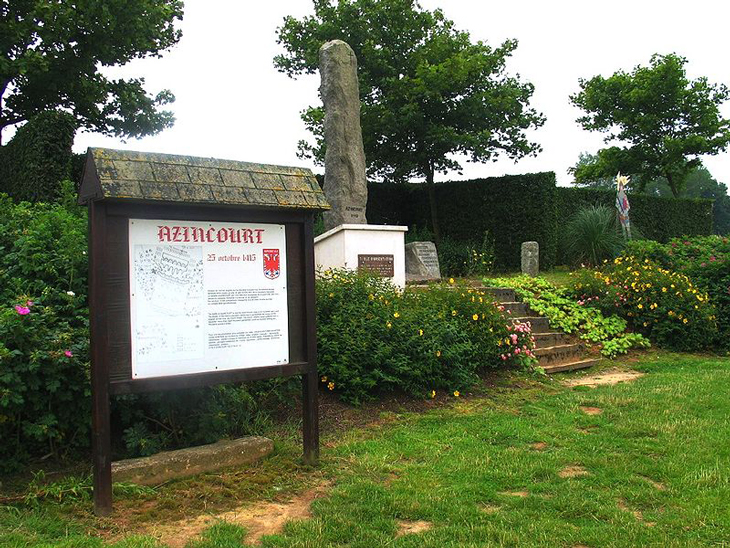 Eventually, it was ‘Azincourt’ which stuck, as it did in England, though we have spelt this very differently:  Agincourt, of course, but also Egyne Court, Gincourt, Agyncoort and even Assyngcowrte; but none of this tells us where the fighting took place.

Traditionally the battle is supposed to have been fought around 45 miles south of Calais, between the woods of Azincourt and Tramecourt.  This is also where the French are supposed to have buried many of their dead, in gravepits near the hamlet of La Gacogne.  In 1734 the Marquise of Tramecourt erected a chapel there and a memorial service was held in this place every twenty-five years, before the building was destroyed during the French Revolution.  Nowadays there is both a 19th century Calvary and a 20th century monolith on the assumed site of the battle, and an interesting Museum (the Musée de la Bataille) in the village of Azincourt.

Given the presence on the battlefield of thousands of English archers, to say nothing of the French troops, one would have expected to find some physical evidence there, even after 600 years – in the form of arrowheads, horseshoes and nails, pieces of armour, or more personal items like rings and buckles.  Yet, when a team of archaeologists surveyed a sample of fields in the traditional location for Granada TV in 2002, they found only one medieval artefact, which might possibly (only possibly) be an arrowhead.

The TV programme which resulted was first broadcast on 23 November 2003, as part of the Battlefield Detectives series.  It featured the archaeologists Tim Sutherland and Simon Richardson, the historians Anne Curry and Matthew Bennett and several scientists; and it had a strong storyline, as the title of the episode (Agincourt’s Dark Secrets) indicates; but it did not cast doubt on the traditional location.  However, when Sutherland wrote about these investigations in 2006, he took a different line, proposing an alternative location for the battle near the village of Ruisseauville, to the north of Azincourt.

In 2007 Sutherland went back and excavated the area around La Gacogne; and this time drew a complete blank, finding ‘no evidence of either human bones or a grave-pit’.  In 2008 he delivered a paper about this investigation to a conference in Germany.  His conclusion was that ‘currently not only is there no physical evidence that there are, or ever have been, any human remains or large pits within the protected area of the enclosure at Agincourt, but there is currently no available evidence of the battle at Agincourt at all’(!)  He re-stated his conclusion for a different audience in Agincourt’s Lost Dead, an episode in the TV series Medieval Dead, shown in June 2013.

I am not an archaeologist but in my view the doubts as to location raised by the archaeology are not very serious; and the battle most probably did take place where the historians (and the custodians of the Musée de la Bataille!) have always said that it did.  Firstly – as Sutherland tells us – the ground may well have been disturbed when Sir John Woodford, a Quarter-Master in the British Army which occupied the area after Waterloo, excavated in 1818.  Secondly, the battlefield was probably thoroughly picked over by French and English alike, after the fighting.  There is a story that the Bishop of Thérouanne took away the bodies of a dozen noblemen for burial in the cloisters of a local abbey, possibly at Auchy-lès-Hesdin.  We also know that the English, who nearly all survived Agincourt, were allowed to recover any arms and arrows left behind, as well as take booty left by the enemy. Thirdly, the ground around the modern Calvary may well have been disturbed by the building of the Marquise of Tramecourt’s chapel.  Finally, the land around Azincourt is arable, and has been for centuries.  This contrasts very starkly with the site of the Battle of Towton in Yorkshire (1461), where artefacts and skeletons have both been found, but which was moorland at the time (1).  The Detectorists, BBC 4’s comedy duo, cannot have been the first to show an interest in what our medieval ancestors left behind.  The ploughman and his lad may well have found rich pickings on the fields around Azincourt.

This account is largely based on  Tim Sutherland: The Battle of Agincourt: An Alternative Location (Journal of Conflict Archaeology, Vol. 1, No. 1, 245-263, 2005); and Archaeological evidence of medieval conflict – case studies from Towton and Agincourt (Schlachtfeldarchäologie, Landesmuseum Für Vorgeschichte, 2009)

Photograph of the commemorative monument near to the site of the battlefield taken from Wikipedia, author Paul Hermans, GNU Free Documentation Licence