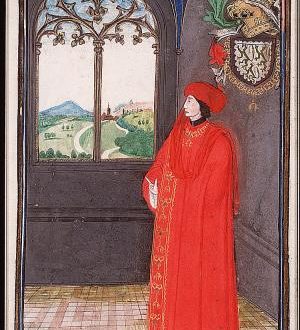 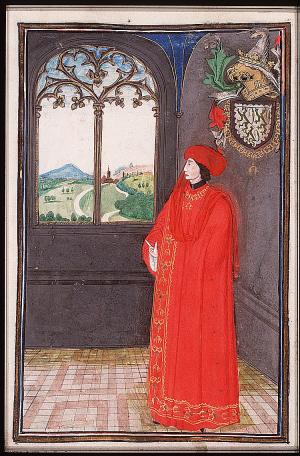 We have an important reminiscence by Ghillebert de Lannoy, lord of Willerval, who was taken prisoner at the battle. His lordship was in the Pas-de-Calais 8km to the north of Arras and 50 km to the south east of Azincourt. He was therefore one of many men from the area who served at the battle.

In 1415 he was 29 years old and chamberlain to Philip, count of Charolais. Philip was the eldest son of John the Fearless, duke of Burgundy, and became duke of Burgundy himself in 1419. Count Philip and Duke John were not at the battle but many of their followers were.

Lannoy was not in captivity for long since in 1416 we find him as captain of Sluys, just to the north of Bruges and where Edward III had won a famous naval battle in 1340. Both before and after 1415 Lannoy travelled widely, writing accounts of his voyages. After the treaty of Troyes of 1420, which made Henry V heir and regent of the kingdom of France, Lannoy was sent by Henry to Palestine. This reveals Henry’s interest in possible crusading following his successes in France. Lannoy died in 1462

There are several interesting things in his reminiscecnce. He calls the engagement the battle of Ruisseauville, not Agincourt. Ruisseauville was the village to the north of the battlefield, and was where the French had gathered and camped on the eve of battle.

Lannoy fought as a man-at-arms in the battle. He was wounded and his reminiscence recalls how he had been in the piles of dead and wounded French. The English searched through these heaps. That suggests that they thought the battle was over. But then a shout went up that there was a new French attack. According to Lannoy, this was the arrival of the duke of Brabant, the brother of the duke of Burgundy. Lannoy tells us that the English set fire to the house where he and other prisoners were but that he managed to crawl out, only to be recaptured.

‘In 1415 I was at the battle of Ruisseauville where I was wounded in the knee and the head, and I laid with the dead. But when the bodies were searched through, I was taken prisoner, being wounded and helpless (impotens), and kept under guard for while. I was then led to a house nearby with 10 or 12 other prisoners who were all wounded. And there, when the duke of Brabant was making a new attack, a shout went up that everyone should kill his prisoners. So that this might be effected all the quicker, they set fire to the house where we were. By the grace of God, I dragged myself a few feet away from the fire. There I was when the English returned, so I was taken prisoner again and sold to Sir John Cornwall, thinking that I was someone of high status since, thank God, I was well accoutred  when I was taken the first time according to the standards of the time. So I was taken to Calais and thence to England until they discovered who I was, at which point I was put to ransom for 1,200 golden crowns (écus) along with a horse of 100 francs. When I left my master, Sir John Cornwall, he gave me 20 nobles to purchase a new suit of armour (harnas).’

Image of Ghillebert de Lannoy, taken from Wikipedia and is in the Public Domain