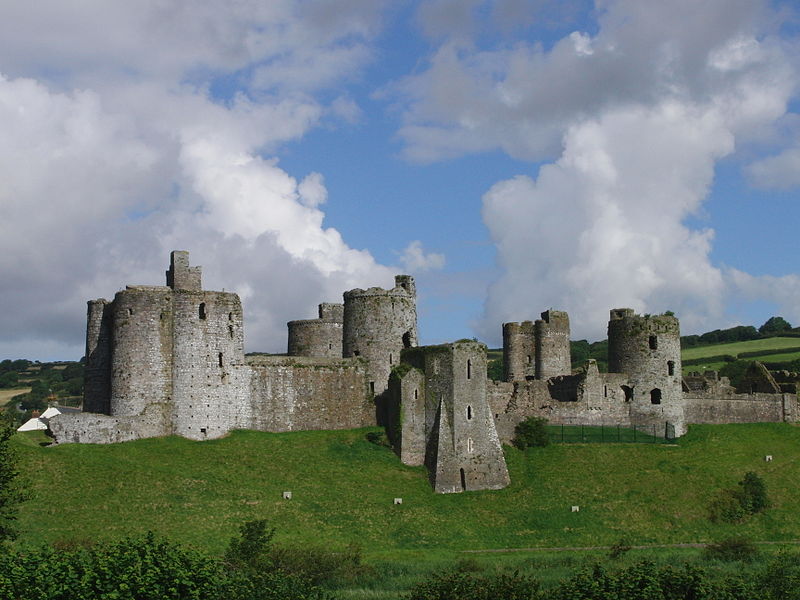 “Your majesty says very true: if your majestie is remembered of it, the Welshmen did good service in a garden where leeks did grow, wearing leeks in their Monmouth caps; which, your majesty knows, to this hour is an honourable badge of the service; and I do believe your majesty takes no scorn to wear the leek upon Saint Davy’s day.”

One of the great popular images of the battle of Agincourt is that the majority of the ‘English’ archers present were Welshmen – doubtless with leeks in their Monmouth caps – and that this great victory could be seen as much a Welsh victory as an English one. It must be said that Shakespeare has a hand in this and that the memorable, florid and hot-tempered ‘Fluellen’ found in Shakespeare’s play of Henry V goes some way to putting the Welsh at the forefront of our imagining of the battle.

The playwright goes further, of course, reminding the audience of Henry’s birth in Wales and having the king wear a leek on St David’s day and to go so far as to say ‘for I am Welsh you know’.  Both Fluellen and Henry’s self-conscious Welshness owe more to the context in which the play was written and first performed – in 1598-9 in the last years of the reign of Elizabeth I (d. 1603).  Such comic Welshmen were a feature of the Tudor stage and Elizabeth herself made some play of her Welsh ancestry; including wearing a leek on St David’s Day. Shakespeare’s historical drama was written for his own times and Fluellen, in fact, was explicitly referring to the service of the Welsh in the time of Edward, the Black Prince, possibly at the battle of Poitiers (1356).

The popular line that Agincourt was a ‘Welsh’ ultimately derives from Shakespeare, but it is pervasive. I was interviewed on BBC Radio Wales about this once and, having carefully explained the above was ‘reminded’ that “one Welshman was worth ten Englishmen”. The facts, so far as they are known, do not necessarily sustain this confidence. However, the troops from Wales are well-documented and tell an interesting story about Wales in the early fifteenth century.

First, Wales, as we think of it today was not how it appeared in the fifteenth century. It consisted of five counties in the north and west of Wales – Carmarthenshire, Cardiganshire, Merioneth, Anglesey and Caernarfonshire – which were under the control of the crown or, when there was one, the eldest son of the king: the Prince of Wales. Flintshire was also a royal county, but formed part of the earldom of Chester. The remainder was divided into around forty independent lordships which, following their conquest by Norman lords in the twelfth century, had become the private property of members of the English nobility, the Welsh March.

Henry V, as grandson of John of Gaunt, duke of Lancaster, had several Marcher lordships in southern Wales, notably Brecon, Kidwelly (or Cydweli), Monmouth and Hay. The lands of the principality were under the king’s control in 1415 so Henry V had greater control over the lands of Wales than any previous medieval ruler and, through his years spent combating Owain Glyndŵr’s rebellion, greater personal familiarity with them than any English monarch since Edward II. It was natural that he would wish to recruit soldiers from these estates but the loyalty of the Welsh could not be trusted, still less taken for granted. Owain himself was still at liberty and governmental control of the north or Wales was nothing like complete and the Lollard rebellion led by Sir John Oldcastle, a Herefordshire man, had caused fresh fears of rebellion on the part of Henry and his council in 1415. Against this background it is surprising that any troops were recruited from Wales at all.

We know quite a lot about the archers and men-at-arms recruited from Wales in 1415. We have documents recording all their names, including the names of those who, for whatever reason, could not serve in person. In these cases, we have the names of the substitutes they provided included in muster rolls made at Carmarthen and Brecon on 26 June 1415. These rolls were made under the supervision of the chamberlain of South Wales – the counties of Carmarthenshire and Cardiganshire – John Merbury, who also served as steward of the king’s lordship of Brecon.

A mix of troops recruited from southern Wales in 1415. From Brecon and other Lancaster lordships there were 10 men-at-arms, 14 mounted archers and 146 foot archers. From the royal shires of South Wales and their dependent lordships came a further ten men-at-arms and three mounted archers with 323 foot archers. We know that they were mustered in Carmarthen – administrative centre of the southern part of the principality of Wales – and at Brecon, centre of the duchy of Lancaster estates in Wales on 26 June. 513 troops were assembled there though it is probable that as many as forty were seconded to defend south Wales and thus never left Carmarthen. Two of their leaders were listed among the archers recruited from Carmarthenshire so it seems likely that the men under their command came from the same source – they were paid for 45 and a half days from the revenues of John Merbury, the chamberlain of South Wales.  All these troops probably took the same road from Carmarthen, across south Wales to Brecon and thence to Hereford and south to Southampton. They certainly passed through Warminster, Wiltshire, since the townspeople complained that Welsh (and English) soldiers had taken food without payment.

A further nine men, three men-at-arms, three mounted archers and three archers on foot were recruited from the small lordship of Kidwelly to the west of Swansea. The roll documents from which part of which lordship or from which Commote (a medieval Welsh land unit, very roughly the equivalent of a Hundred in an English county) each man came from. In the royal counties, it is likely that each man was subject to a personal summons or that the community was liable to produce a set number of men and selected these themselves, since some men saw fit, for whatever reason, to provide substitutes. Some, we know, were former rebels and it is probable that many more had also joined Owain Glyndŵr in rebellion. They clearly had something very specific – legal pardon or the return of the their lands – to gain.

If only 460 Welsh soldiers left Wales, their numbers were thinned yet further by disease at Harfleur. The precise extent of this is not known, like much else following the fall of Harfleur and the lead-up to the battle but it is probable that only around 400 of the 513 initially recruited actually fought at the battle in an army of around 8000. Some of these were former rebels others had been consistently loyal to the English crown. None are known to have died at Agincourt, though Dafydd or Davy Gam, who by merit of his long service to the House of Lancaster indented to serve with the king directly as a man-at-arms with three archers, did and he is the only Welshman to be noted by name in any on the contemporary accounts of the battle and, moreover, in Shakespeare’s play.

The Welsh archers at Agincourt make a good story in myth, but their importance in reality should not be overplayed. Perhaps only 400 Welsh archers were present at the battle but, in the context of a ten year rebellion which had ravaged Wales and the distrust with which Welshmen continued to be regarded throughout the fifteenth century – they were, theoretically at least, forbidden to hold land or public offices in England for example – it is a wonder that any soldiers were recruited from there at all. Henry V’s decision was in part pragmatic; he needed the men, but the evidence suggests that these Welshmen were chosen carefully. Many of them, prominent rebels like Gruffudd Dwnn, were in need of the king’s good will. Understandably, there was ambivalence at the heart of the Welsh attitude to the wars in France. Dwnn is an interesting case; he later served with distinction in France and was made constable of Kidwelly Castle which he had helped besiege as a rebel.

There is an enormous amount of Welsh language poetic, often chivalric, literature celebrating and praising the warlike qualities of the Welsh gentry in the fifteenth century, such as that of Guto’r Glyn who was himself a soldier, but nowhere in the literature that survives is Agincourt mentioned and nowhere in the literature remembering the battle of Agincourt in the fifteenth century – English, Welsh or French – are Welsh archers mentioned at all.

If you want to know more, the full article this blog is based on was published in the Journal of Medieval Military History Volume IX: Soldiers, Weapons and Armies in the Fifteenth Century edited by Anne Curry and Adrian Bell

Adam Chapman’s book, Welsh Soldiers in the Later Middle Ages, 1282-1422, has been published by Boydell & Brewer