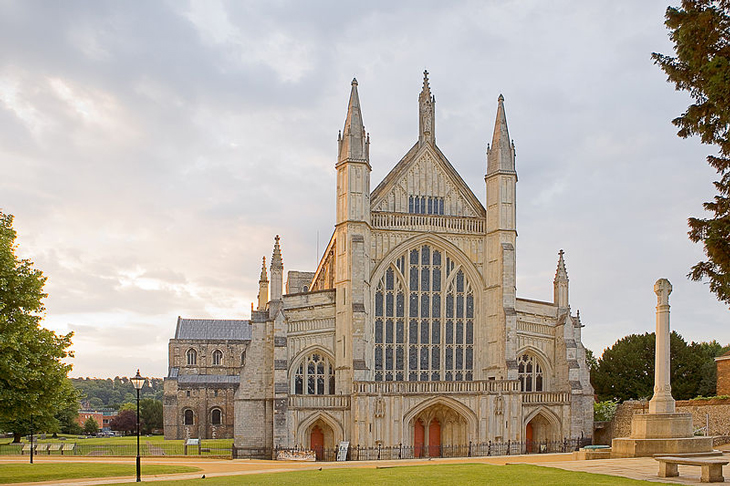 WinchesterCathedralHenry V needed to assemble a large army and fleet for his invasion of France in 1415.

However feeding the thousands of soldiers and sailors for the expedition was a major undertaking. The south coast of England, particularly Southampton and the surrounding region, was the mustering point for the English army. This is likely to have placed enormous demands on the resources of the area to provide for thousands of soldiers, but royal records give us important insights into how food supplies were ensured. On 27 May 1415, the king ordered a proclamation to be made in the town of Southampton and city of Winchester for bread to be baked in anticipation of the arrival of the army. In late June sheriffs in the counties of south-eastern England, including Hampshire, were ordered to provide live animals for the expedition. They were collected at Tichfield, Southwick,Beaulieu, Lymington, Romsey, Alresford, Fareham and Southampton, where they were sold to the captains: each captain was responsible for feeding his retinue. The account of the receiver-general of the Earl marshal, which survives in the archives of Berkeley Castle, shows how food and drink, as well as animals, were collected at Bosham for transportation to Portsmouth and then Harfleur.

A week before the expedition sailed, on 24 July, the sheriff of Hampshire was ordered to proclaim that all participants in the expedition should each take with them enough supplies to last them for at least three months. The need to obtain sufficient quantities of food and drink is likely to have caused problems with the local inhabitants. The royal order of 24 July invited anyone who had suffered molestation from soldiers to lodge their complaints before the steward and controller of the household. Four days later, the king heard that English and Welsh soldiers passing through Warminster had taken goods without paying. The king, concerned at the bad example this might set, commanded that they pay for the goods. If they did not, then the sheriff of Wiltshire could call out his posse to force the soldiers to make payment.