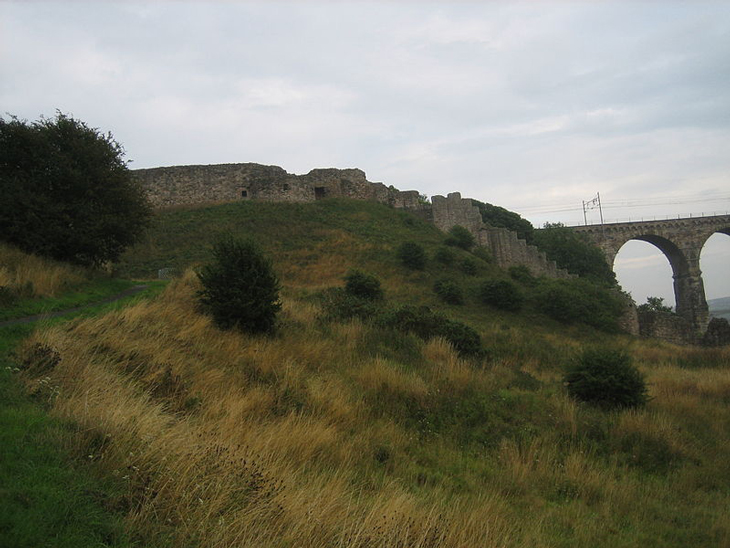 The ruins of Berwick CastleThroughout the Hundred Years War (1337-1453) the Scots were allied with the French in the ‘Auld Alliance’ and this stimulated the creation of the Marches on either side of the Border, militarised zones where warfare between English and Scots was endemic.

Richard II and Henry IV invaded Scotland in force and their armies reached Edinburgh, and on the other hand the Scots burnt Berwick on Tweed in 1405; but more typical was the constant raiding conducted by Border forces on each side.

Shakespeare was aware of the strategic problem posed by a hostile Scotland; and, in the opening scene of his play Henry V, the Earl of Westmoreland advises the King:

There’s a saying very old and true,
‘If that you will France win,
Then with Scotland first begin:’

Henry is aware of the danger; but there are alternative strategies for dealing with it. The Archbishop of Canterbury advises that the defence of the Border can safely be left to local forces:

They of those Marches, gracious sovereign,
Shall be a sufficient wall to defend
Our inland from the pilfering borderers.

But Henry is made to disagree:

We do not mean the coursing snatchers only,
We fear the main intendment of the Scot,
Who hath been still a giddy neighbour to us;
For you shall read that my great-grandfather
Never went with his forces into France
But that the Scot on his unfurnish’d kingdom
Came pouring, like the tide into a breach.

The great-grandfather here was Edward III; and it is true that, when Edward invaded Normandy in 1346, a Scottish army estimated at 12,000 men invaded England and almost reached Durham, though they were heavily defeated at Neville’s Cross. In 1388 the Scots defeated local levies at Otterburn in Northumberland, while in 1402 an army of perhaps 10,000 Scots reached the outskirts of Newcastle. However, as they were retreating through Glendale near Wooler, they were defeated at the foot of Humbleton (or ‘Homildon’) Hill, and 28 Scottish noblemen were taken prisoner.

However, Shakespeare was exaggerating the danger posed by the Scots on the eve of the Agincourt expedition. There were several reasons why Henry V did not need to fear a major Scottish invasion. Firstly, King James I of Scotland had been a prisoner in England since he was captured in 1406, when he was heir to the Scottish throne. Secondly, Scotland was riven by internal divisions. Thirdly the priority of Robert, Duke of Albany, Regent of Scotland, was to negotiate the release of his son, Murdoch Earl of Fife, one of those captured at Humbleton Hill. Accordingly, the Regent extended the truce with the English which had been agreed at the end of Henry IV’s reign.

Between 1413, when he came to the throne, and 1415, when he assembled his troops for the invasion of France, Henry V relied on diplomacy to keep the Scots at bay. He did not organise a large expedition into Scotland, as his father and Richard II had done in 1400 and 1385; but agreed with Albany to extend the truce; and he even agreed to release the Regent’s son. Moreover, contrary to Shakespeare’s suggestion, he clearly intended to rely on his Borderers – they of those Marches. It is true that he ordered repairs to be carried out at Berwick, and at Roxburgh (an English outpost in the Southern Uplands of Scotland); and he reviewed his father’s appointments in the Marches.  It is also true that, when the army was summoned to Southampton in 1415, he ordered that the levies of Cumberland, Westmoreland, Northumberland, Durham and Yorkshire remain in the North, and he strengthened them with an extra 600 men, whilst also ordering that reinforcements be sent to Berwick and the East March; but there is no evidence that he feared the main intendment of the Scot – an invasion by a large Scottish field army.

The diplomacy was not entirely successful. It had been agreed that Murdoch be exchanged for Henry Percy (heir to the Earldom of Northumberland and son of Harry ‘Hotspur’), who had been an exile in Scotland since 1403; but, as he was travelling North, the Scotsman was mysteriously abducted, possibly by conspirators connected with the Southampton Plot. Although Murdoch was soon rescued, the effect was to delay his release; and his father Albany now gave his Borderers free rein.  Two parties of Scottish raiders now invaded England.

The smaller of these forces invaded Westmoreland, but turned back after burning Penrith; but the second was defeated in battle, and the circumstances here are interesting.  These Scots used the invasion route through Glendale, along which their compatriots had retreated in 1402; but in 1415 they were stopped in their tracks at Yeavering, only ten miles from the Border.  The small English force which did this was led by Sir Robert Umfraville, a man with considerable experience of Border warfare, who had been Keeper of Roxburgh since 1411; and he was therefore able to attack the Scots from the rear.  Moreover, in Shakespearean terms he and his men had much in common with the pilfering borderers who were their enemies.  Henry V’s strategy for fending off the Scots with local forces had been triumphantly vindicated; and he could conduct his campaign in France without needing to worry any further about an invasion from the North.

The first photograph is of Berwick Castle, taken from Wikipedia under the GNU Free Documentation Licence, author Neddyseagoon